The character first appeared in All Star Comics #8(December 1941) and made her first cover appearance in Sensation Comics #1(January 1942). Wonder Woman is considered to be a feminist icon.

Wonder Woman was sculpted from clay by her mother Hippolyta and received her superhuman powers from Olympic Deities, these powers combined with her Amazon training helped to develop a wide range of skills which makes a fierce warrior.On Paradise Island, she goes by her name Diana.

She possesses an arsenal of weapons including a Sword, a Shield, The Lasso Of Truth, a pair of Indestructible Bracelets and a Tiara which she uses as a projectile.

In an October 25, 1940 interview with the Family Circle magazine, William Moulton Marston discussed the unfulfilled potential of the comic book medium. This article caught the attention of comics publisher Max Gaines, who hired Marston as an educational consultant for National Periodicals and All-American Publications, two of the companies that would merge to form DC Comics.(1)

William Moulton Marston, a psychologist already famous for inventing the polygraph, struck upon an idea for a new kind of superhero, one who would triumph not with fists or firepower, but with love. "Fine," said his wife Elizabeth. "But make her a woman."(2) 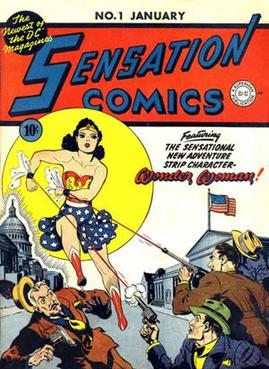 Diana is the daughter of Queen Hippolyta, the first child born on Paradise Island in the three thousand year history that the immortal Amazons lived there. The Amazons had been created around 1200 B.C. when the Greek Goddesses drew forth the souls of all women who had been murdered by men. One soul was left behind, the one that would be born as Diana. That soul originally belonged to the unborn daughter of the first woman murdered by a man (whom Hippolyta was the reincarnation of). In the late 20th Century, Hippolyta was instructed to mold some clay from the shores of Paradise Island into the form of a baby girl. Six members of the Greek Pantheon then bonded the soul to the clay, giving it life. Each of the six also granted Diana a gift: Demeter, great strength; Athena, wisdom and courage; Artemis, a hunter's heart and a communion with animals; Aphrodite, beauty and a loving heart; Hestia, sisterhood with fire; Hermes, speed and the power of flight. Diana grew up surrounded by a legion of sisters and mothers. When she was a young woman, the gods decreed that the Amazons must send an emissary into Man's World. Queen Hippolyta ordered a contest to be held, but forbade Diana from participating. Diana disobeyed and did so anyway in disguise, easily winning the contest and being named the Amazon's champion. She was given a uniform fashioned from the standard of someone who had visited the island a few decades earlier.(3)

Before embarking on her mission, Diana was given the Lasso of Truth, forged by Hephaestus himself. She was also given the Sandals of Hermes, which allowed her to instantly traverse great distances in seconds. Diana's mission was one of peace, but part of it initially involved defeating a mad plot by Ares to destroy the world. Diana ventured into the world by starting at Boston. There she met a Harvard professor, Dr. Julia Kapatelis, and her daughter, Vanessa Kapatelis, as well as the Air Force Officers Steve Trevor and Etta Candy. Diana stayed with Julia and Vanessa and over the course of a month or two, Diana learned to speak English. She was attacked at their home by Decay, one of Ares' minions, and after a battle that spilled out into the streets of Boston she first came to the public's eye and was given the name Wonder Woman. Upon discovering Ares' plan (one that involved creating a nuclear holocaust), Diana managed to foil it, battling through his sons Phobos and Deimos before finally convincing him the error of his ways with the Lasso. After defeating the God of War, Diana returned home for healing at the hands of Poseidon himself.(4)

After the events of The Darkseid war,Wonder Woman is told by the dying Myrina Black that on the night of her birth, another child was born. This child was revealed to be male, known as Jason, and is said to be incredibly powerful. Wonder Woman makes it her mission to find him.

Wonder Woman has a wide range of powers including superhuman strength,speed, agility, durability, endurance, reflexes, longevity, flight and is a master of hand-to-hand combat.

Wonder Woman is one of the most powerful characters of the DC Universe. She can fight toe-to-toe against Superman. The combination of her powers and her Amazonian training makes her a force to be reckoned with.

Wonder Woman is depicted as a masterful athlete, acrobat, fighter and strategist, trained and experienced in many ancient and modern forms of armed and unarmed combat, including exclusively Amazonian martial arts.  Batman once called her the "best melee fighter in the world". She has an arsenal of powerful God-forged weapons at her disposal, but her signature weapons are her indestructible bracelets and the Lasso of Truth. 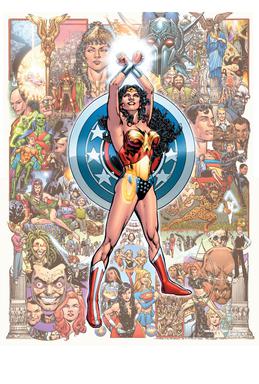 Wonder Woman has a number of allies including Steve Trevor, Etta Candy, her mother Hippolyta and Wonder Girl:Donna Troy. Wonder Woman on occasion teams up with Superman or Batman and being one of the founding members of the Justice League, she asks them for help. Wonder Woman has made many enemies over the years. The enemies of Wonder Woman are a diverse bunch, and range from thieves to spies to Gods. The majority of her foes are women, and the only "official" union, Villainy, Inc., is all-female, though Doctor Psycho has a long history of teaming up with other villains. Some of them are Angle man, Cheetah, Circe, Ares, Dark Angel, Decay, Doctor Cyber and Doctor Psycho. Wonder Woman was an American TV series based on the character. It starred Lynda Carter as Princess Diana/Diana Prince. Wonder Woman aired on two American networks between 1975 and 1979. During its original run the series was extremely popular. It is also the title of a TV movie starring Cathy Lee Crosby, loosely based upon the character, that aired in 1974.

You can check out the (unofficial)trailer below When Gal Gadot was cast as Wonder Woman, many fans were disappointed saying that she didn't have the physique to play the character,but when the movie released fans were delighted and extremely satisfied with her performance.

You can check out the trailer here. Wonder Woman is an upcoming movie and will be the fourth installment in the DC Extended Universe. Wonder Woman features Gal Gadot reprising her role as Wonder Woman and Chris Pine as Steve Trevor.

You can check out a teaser below.

You can check out our Wonder Woman products here.