The Flash is the name of several fictional characters appearing in comic books published by DC Comics. The first Flash was the Golden age Flash AKA Jay Garrick. He was created by Gardner Fox and Harry Lampert and debuted in Flash Comics #1(January 1940). All Flash characters possess super speed which also enables them to travel through time. The characters are referred by many epithets and vary by character, Barry Allen's Flash is known as The Scarlet Speedster and Jay Garrick's Flash is known as The Crimson Comet.

Before Wally and Bart's ascension to the mantle of the Flash, each had been a protégé of the current Flash under the same name Kid Flash. Each incarnation of the Flash has been a key member of at least one of DC's premier teams: the Justice Society of America, the Justice League, and the Teen Titans.

Flash is one of the most powerful characters of the DC Universe. He is responsible for many reality changing crises like the most recent events, The New 52 and Rebirth.

Flash might be the most powerful character in the DC Universe, on the basis that he can travel back in time and stop the characters from becoming heroes(for example, he can save Bruce Wayne's parents from being killed by Joe Chill) or he can just kill the heroes when they're kids.

The Flash first appeared in the Golden Age Flash Comics #1 (Jan. 1940), from All-American Publications, one of three companies that would eventually merge to form DC Comics. Created by writer Gardner Fox and artist Harry Lampert, this Flash was Jay Garrick, a college student who gained his speed through the inhalation of hard water vapors. When re-introduced in the 1960s Garrick's origin was modified slightly, gaining his powers through exposure to heavy water.With superheroes' post-war decline in popularity, Flash Comics was canceled with issue #104 (1949) which featured an Evil version of the Flash called the Rival.

In 1956, DC Comics successfully revived superheroes, ushering in what became known as the Silver Age of comic books . Rather than bringing back the same Golden Age heroes, DC rethought them as new characters for the modern age. The Flash was the first revival, in the aptly named tryout comic book Showcase #4 (Oct. 1956).

This new Flash was Barry Allen, a police scientist who gained super-speed when bathed by chemicals after a shelf of them was struck by lightning. He adopted the name The Flash after reading a comic book featuring the Golden Age Flash. After several more appearances in Showcase, Allen's character was given his own title, The Flash, the first issue of which was #105 (resuming where Flash Comics had left off). Barry Allen and the new Flash were created by writers Robert Kanigher and John Broomeand cartoonist Carmine Infantino. 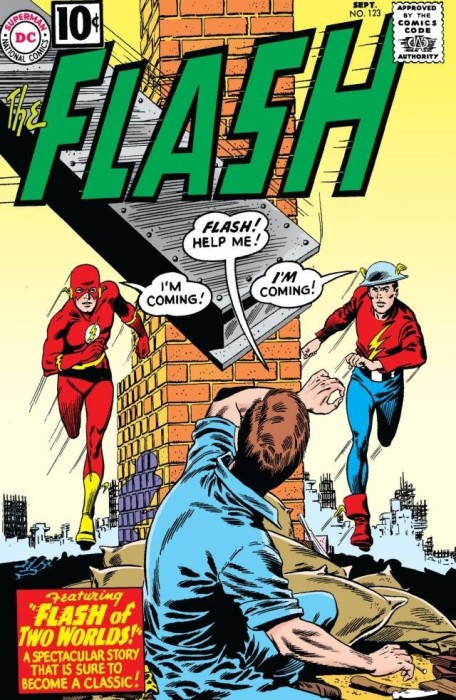 Barry Allen's title also introduced a much-imitated plot device into superhero comics when it was revealed that Garrick and Allen existed on fictional parallel worlds. Their powers allowed them to cross the dimensional boundary between worlds, and the men became good friends.Flash of Two Worlds (The Flash (vol. 1) #123) was the first crossover in which a Golden Age character met a Silver Age character. Allen died heroically in Crisis on Infinite Earths #8 (1985). Thanks to his ability to travel through time, he would continue to appear occasionally in the years to come.

The third Flash wasWally West, introduced inThe Flash (vol. 1) #110 (Dec. 1959) asKid Flash. West, Allen's nephew by marriage, gained the Flash's powers through an accident identical to Allen's. Adopting the identity of Kid Flash, he maintained membership in theTeen Titans for years. Following Allen's death, West adopted the Flash identity in Crisis on Infinite Earths #12 and was given his own series, beginning withThe Flash (vol. 2) #1 in 1987. Many issues began with thecatchphrase: "My name is Wally West. I'm the fastest man alive."

As a boy, Jay Garrick used to read pulp magazine stories of the turn-of-the-century super-hero, Whip Whirlwind. Little did he know that he would be granted the same powers of super speed. 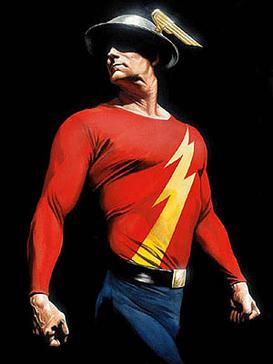 Jay would go to Midwestern University in Keystone City where he would double-major in chemistry and physics. An experiment he was working on during his junior year was to purify hard water without any residual radiation in a cyclotron. When a test tube of the hard water was accidentally spilled, the fumes knocked him out. His friend Elliot Shapiro dragged him from the lab. After a week of unconsciousness, during which Jay's metabolism increased and his body rejected nutrients, he discovered that he had been given superhuman speed by the accident, and he used this speed as the superhero, Flash.(2)

When he was a child, his mother was killed and his father was convicted of the crime. The drive to prove his father was innocent gave Barry a strong belief in justice. That night during an electrical storm, Barry returned to an experiment after a short break. All of a sudden, a bolt of lightning streaked through a window, shattered a chemical cabinet and covered Barry in the electrified chemicals. Dazed, he decided to return home in a taxi. However, the taxi started to pull away without noticing him. Barry sprinted after it, only to run straight past it as if it had been standing still. He decided to sit down and recollect his thoughts at a diner. A passing waitress accidentally spilled the items of her tray onto Barry, who amazingly caught them all in mid-air and returns them to the tray. The next day, Barry saved Iris from a stray bullet. There was no question about it: the freak accident had somehow given Barry superhuman speed!(3) One summer, when he was ten years old, Wally went to Central City to stay with his AuntIris, whom he called his best friend. Iris was going out with police scientist Barry Allen, who was "friends" with the Flash. Barry "introduced" Wally to his idol, the Flash. In the back room of Barry's apartment was a lab, where Wally asked the Flash all sorts of questions. When he asked Flash how he got his powers, it turned out the speedster had set up his chemical cabinet just as it had been when he was created. Wally wished that something like that could happen to him; the Flash dismissed it as a billion-to-one chance. However, it just so happened that the weather that particular day was stormy and, at that moment, lightning did strike the cabinet, bathing Wally in the same chemicals that created the Flash.

Flash told Wally to keep this a secret, even from Iris. He gave Wally a Flash costume specially tailored to fit him, and Wally became Kid Flash. During the Crisis on Infinite Earths, after Barry Allen sacrificed his life to destroy the Anti-Monitor's antimatter cannon, an antimatter ray fired by the Anti-Monitor hit Wally full force. While it knocked his speed down to that of sound, it also removed the malady that caused him intense pain. Wally took Barry's uniform and declared himself the Flash, just until Barry returned.(4)

All incarnations of the flash have the ability of super-speed, some of the modern Flashes can vibrate so rapidly that they can easily pass through solid objects.They can use their speed to travel through time and they can also travel to diffrent dimensions.

Jay Garrick has a number of allies including his wife Joan Williams, the Justice Society Of America, Worry Wort and Maria Flura. Barry Allen has a number of allies including his wife Iris West,Joe West, his father Henry Allen, the Justice League, his close friends Green Lantern/Hal Jordan and Green Arrow/Oliver Queen. Barry Allen has made a number of enemies over the years including Reverse-Flash, Gorilla Grodd, Captain Cold, Heatwave and Captain Boomerang. Wally West has made a number of enemies over the years including Zoom, Albert Micheals, Alchemist, Black Flash and Blitzen.

The Flash made a cameo appearance in Batman V Superman. The character is portrayed Ezra Miller.

You can check out the video below (SPOILERS)

The Flash is a TV Series which airs on The CW. The show is produced by Greg Berlanti. It features Grant Gustin as Barry Allen/The Flash, Tom Cavanagh as Harrison Wells, Danielle Panabaker as Caitlin Snow, Candice Patton as Iris West, Carlos Valdes as Cisco Ramon and Jesse L. Martin as Joe West.

The antagonist for season was Reverse-Flash. You can check out the trailer below

The antagonist for season 2 was Zoom. You can checkout the trailer below

You can check out our Flash products here