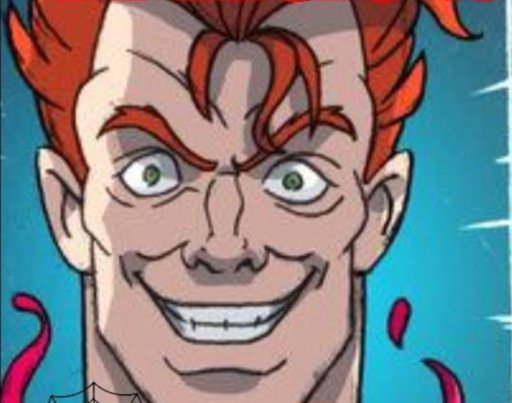 Writer Michelinie created carnage to be a darker version of Venom, intending to have Venom's human alter ego Eddie brock be killed off in the Amazing Spiderman issue #400 and have the symbiote continued to bond with a series of hosts.

However, as Brock and Venom's popularity increased, Marvel would not allow him to be killed. Michelinie only had one option left, to create a new character who was a total psychopath and unlike Venom had no sense of morality. The character was originally meant to be named Chaos and then Ravaged before they settled on Carnage.

Cassidy was designed by artist Eric Larson who modeled the character after DC comics supervillain the joker, which is pretty obvious once you compare the two. As for Mark Bagley's role, he designed the Carnage symbiote.

Cletus Cassidy is a pure psychopath and a sadist. Yeah, they definitely took inspiration from the joker. Cassidy is a deeply disturbed individual with a dark past as a child, he killed his grandmother by pushing her down a flight of stairs and he also once tried to murder his mother by throwing a television into a bathtub and once tortured and killed his mother's dog.

After the latter, his mother tried to kill him, he soon became an orphan and was sent to a home for boys where his anti-social behavior made him a target of abuse from the other orphan kids and the staff. But Cassidy soon became a full-blown Psychopath and started getting his revenge by murdering a teacher and pushing a girl in front of a moving bus because she laughed at him for asking her out on a date. He also burned down the orphanage like a maniac.

Anyway, during his brutal years at the home for boys, Cassidy acquired his philosophy that life was essentially meaningless and futile. That laws were only words and came to see the spreading of chaos through random on patterned bloodshed as the ultimate freedom flash forward a bit Cassidy became a serial killer.

He was captured and sent to Rikers Island prison for 11 murders though he bragged of a dozen more and there he shared a cell with Eddie Brock who had lost the alien symbiote.

Venom, Brock's symbiote soon returned and bonded with him again and unwittingly left behind a symbiote offspring. Symbiotes reproduce sexually once per generation the new symbiote then entered Cassidy's bloodstream through a cut and bonded with his blood, transforming him into Carnage.

He escaped prison and began a series of murders and then at the scene of each crime wrote carnage on the walls with his own blood. He soon came face to face with Spiderman, but Spiderman proved to be no match for Carnage. In desperation, Spiderman made a truce with Venom to fight carnage. 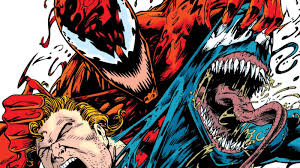 Carnage was defeated with the sonic weapon after this  we get perhaps the most famous Carnage storyline and the Spiderman crossover event, Maximum carnage. The alien symbiote Cassidy was bonded to was destroyed during his capture, so he was presumed powerless and jailed at Riker Island's Asylum.

However, the symbiote mutated his blood prior to its destruction, enabling Cassidy to generate a copy of the symbiote and break out during his escape, Cassidy again, calling himself Carnage, freed his fellow inmate, and started his killing spree through New York City.

He then recruited doppelganger, demo goblin, and Carrying Carnage, and dubbed himself as their father, but in fact, they all despised Carnage and only stay with the group out of devotion to Shriek.

As the death toll increases Spiderman, Venom, Captain America, Black Cat, and so on joined the cause of stopping them.

The Web of Carnage Arc.

During the Web of Carnage arc, Ben Reilly is bonded with the Carnage Symbiote when it escapes from the institute, where its host, Cletus Cassidy is being held. Reilly struggles for control of himself and tries to prevent the symbiote from taking over. The subsequent inner battle with the creature ends when he has John Jamison taken to a cell designed to hold carnage.

He willingly subjects himself to a potentially fatal dose of microwave radiation to try to kill the symbiote, which then returns to Cassidy via the pipes.

Then we have some awesome recent takes on the character like Deadpool versus Carnage storyline which gave us another mashup of sorts when Carnage bonds with the merc with a mouth, Deadpool.

The character was presumed dead and was absent from the comics for nearly six years. But a 2010 limited series titled Carnage featured the return of the symbiote temporarily found a new female host before reuniting with Cassidy.

We all know by now that carnage is the offspring of Venom but Venom isn't the only one popping out babies. Carnage also made a little symbiote bundle of joy called Toxin, which has been said to be the most powerful of all the symbiotes.

The alien symbiote in Cletus Cassidy has enhanced physical strength, greater than that of Spider-man and Venom combined. It gives him shapeshifting abilities and allows him to project a web-like substance from any part of his body.

The symbiote can also form weapons out of itself, like turning his hand into an ax. He can plant thoughts into a person's head using the symbiote tendrils and much like Spiderman, Carnage has the ability to cling to virtually any surface and the list goes on and on.

Being one of the most important supervillains in Spiderverse, Carnage over the years has appeared in many Spiderman and Marvel properties like Movies, TV shows and Video Games.