Top 10 Things That Were Revealed at D23 Expo

Let’s get straight to the important stuff. Today we are looking at the top 10 things that were revealed at Disney’s D23 Expo. In this list, we're looking at the most tantalizing developments to come out of the 2022 iteration of Disney's biennial convention. Things we are covering here can be Marvel Related, Star Wars or just Mainline Disney and Pixar. Which of these are you most looking forward to? tell us by pinging our socials.

The first enchanted was a real treat when it came out in 2007 and Disney fans have been clamouring for a sequel ever since well the wait is finally over as we get our first look at the aptly titled Disenchanted coming to Disney plus in November. Featuring a returning cast that's barely aged a day this follow-up sees Gisele and her family trade the city life for a suburban one but magic isn't too far behind as Gisele starts making a series of wishes to make her surroundings a little more fairytale-like. Sure we can expect another round of catchy songs and subversive comedy while we'd have prefered to see it on the big screen, we'll take whatever we can get after 15 years.


An imminent entry on this list Disney Plus subscribers will not have to wait long before Andor debuts on September 21st while we've gotten footage before this, the final trailer has us even more jazzed to see the adventures of the title thief Cassian Ander. Taking place before the events of rogue one this star wars series will follow Diego Luna's Cassian Andor as he eventually joins the nascent rebel alliance. Honestly, the level of galactic intrigue on display in this trailer has us very excited as a live-action show can finally go in-depth with how the alliance came to be and for anyone who can't get enough of this 12-episode season, it will eventually be followed by another set of 12.

Forget the 15-year wait for an Enchanted sequel, Fans of willow have been waiting since 1988 to see the return of their favourite dwarf sorcerer. While we'd already seen a teaser for this one, this trailer from the expo fleshes out much of what we can expect plot-wise as Willow is again called to the adventure. With all the other major streaming services seeming to go all in with their own high fantasy series now we're glad to see Disney Plus getting in the game with their own and they couldn't have picked a better character to build off. Seriously seeing Warrick Davis return amidst what looks to be a solid supporting cast already has us feeling nostalgic.


Say what you will about the movies but Disney has been revitalizing the galaxy far far away on the tv side of things and that extends to animation. Picking up off the incredible Clone Wars series is Tales of the Jedi a six-episode anthology show dropping on October 26th, 2022. As previously reported its time will be split between two very different Jedi Ahsoka Tano and Count Dooku the latter you'll know for being a sith but the trailer released at D23 gives us a peek at his time before falling to the dark side. We're pretty stoked to see these characters return in addition to Mace Windu, Anakin Skywalker and who could forget Yettle.


For those who feel many MCU projects run the same the Disney Plus shows have had more creative leeway thus far. Perhaps the most out-there project yet is Werewolf by Night coming to the streaming service on October 7th, 2022. A 60-minute tv special rather than a whole series, it still looks incredibly tantalising as the trailer released at d23 looks surprisingly old school and remarkably violent. Actually, in any case, we're absolutely here for the black and white photography and classic monster movie vibe to it as a throng of monster hunters seeks to extinguish a Werewolf that has infiltrated their inner circle.


Disney has been raking in the big bucks in recent years with their live-action adaptations of renaissance era movies and seeing as 1989's The Little Mermaid remains one of the biggest of the bunch. We have no doubt that its remake will be a monster hit come May 2023. in typical teaser trailer fashion this first look gives us brief glimpses of the underwater environment from beautifully rendered sea life to familiar shipwreck imagery unsurprisingly it also hits us with some familiar chords as the notes to part of your world twinkle in, but of course, the big reveal is that of up-and-comer Halle Bailey as ariel herself showing off some amazing vocal prowess.


One of the biggest revelations to come out of Captain Marvel was that a shape-shifting alien species called Skrulls had infiltrated human civilization while those featured in the movie were more or less benevolent the secret invasion mini-series will see the full realization of that conflict for years. The trailer does keep things fairly close. Our biggest takeaway is just how serious it all feels and you know what we're totally ready for a marvel spy thriller with a sci-fi twist. While there is a multitude of familiar faces the series will primarily centre around Nick Fury as he returns to earth to deal with the escalating threat. As he is typically seen as a supporting character to Avengers, we cannot wait to see fury take the center stage in this one.


With respect to Tales of the Jedi, this is the star wars show that's taken the world by storm. Scheduled to come out in February 2023. Season 3 of The Mandalorian will shift focus back to the titular bounty hunter after he spent 2022 as a supporting player in The book of Boba Fett. Fans will probably need to watch that show to be filled in, but this trailer looks to pick things up where season 2 left off. with Mando's actions leading him to be cast out of the Mandalorian order, this will put him in direct conflict with other Mandalorians like Bokotan and the action sequences we've seen have us very excited about the show. But one thing that will never change - how adorable Grogu is.


Pixar's given us a lot of sequels to their classic 90s and 2000s movies but none thus far to a 2010s original. Well, that's about to change with the release of Inside Out 2. Coming out in 2015 the first Inside Out was by far the animation studio's freshest outing in years managing to connect with adults and kids on an emotional level. Likely sensing the need to make everyone cry again Disney has announced a sequel slated for summer 2024 which will show Riley as a teenager as she deals with a slew of new emotions we almost shudder to think what those emotions might be but we have full confidence that Pixar will knock it out of the park with another stellar voice cast she has great new friends, a great new house, things couldn't be better after all Riley's 12 now. 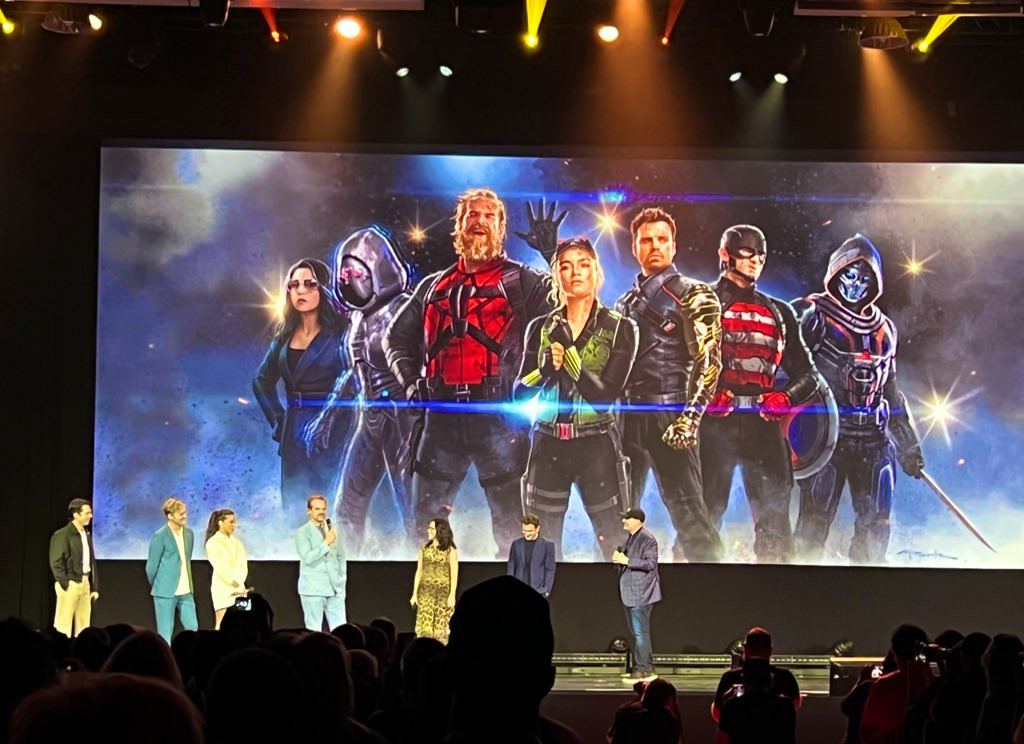 While many were hoping for a Fantastic-Four cast reveal at D23 that didn't happen. But another project we were eagerly awaiting to be filled out was surprisingly announced Thunderbolts movie at SDCC earlier this year. Surprisingly many of the fan theories as to who will comprise the team turned out to be correct as Valentina Allegra de Fontaine will be building on her relationships with US Agent and Yelena Balova the latter of whom seems to be at the forefront, also returning are David Harbor's Red Guardian, villains Taskmaster and Ghost and Steve rogers the best pal Bucky Barnes.

Speaking of Bucky Barnes, Captain America's new world order will finally, see the return of the incredible Hulk's Tim Blake Nelson as the villainous Leader. Also showcased at D23, are Charlie Cox’s and Vincent D'Onofrio’s return as the superhero Daredevil and his arch-nemesis Kingpin and Don Cheedle, who will be reprising his role as the American Patriot (War Machine) in previously left out Armored Wars series on Disney Plus.

These top ten are from just surface of things to come and it has all of us excited for amount of things that are going to come in coming two years, ensuring it's going to be couple of very busy years pop-culturely speaking. And to find best statues, action figures and merchandise, Superhero Toystore will keep bringing you your favourite characters with even more excitement. Happy Collecting!