Captain America is a fictional character appearing in comic books published by Marvel Comics. The character was created by Joe Simon and Jack Kirby and first appeared in Captain America Comics #1(1941).

Captain America was designed as a patriotic supersoldier who often fought the Axis powers of World War II and was a very popular character during the wartime period. The popularity of superheroes waned following the war and the Captain America comic book was discontinued in 1950, with a short-lived revival in 1953. Since Marvel Comics revived the character in 1964, Captain America has remained in publication. 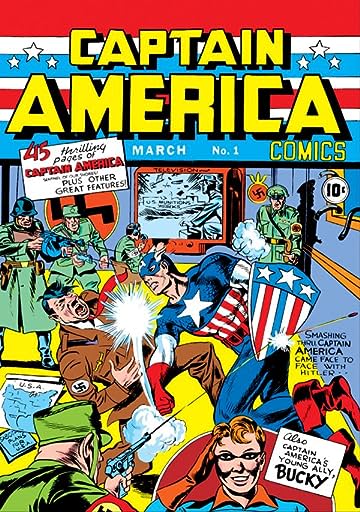 In 1940, writer Joe Simon conceived the idea for Captain America and made a sketch of the character in costume. "I wrote the name 'Super American' at the bottom of the page," Simon said in his autobiography, and then considered:

"No, it didn't work. There were too many "Supers" around. "Captain America" had a good sound to it. There weren't a lot of captains in comics. It was as easy as that. The boy companion was simply named Bucky, after my friend Bucky Pierson, a star on our high school basketball team."

Simon recalled in his autobiography that Timely Comics publisher Martin Goodman gave him the go-ahead and directed that a Captain America solo comic book series be published as soon as possible.(1) Steve Rogers was a scrawny fine arts student growing up during the Great Depression. His alcoholic father died when Steve was a child, and his mother passed away from pneumonia after he graduated high school. In early 1940, appalled at Nazi Germany’s horrific atrocities, Steve attempted to enlist in the army. Failing to pass physical requirements, he was invited to volunteer for Operation: Rebirth, a project intended to enhance US soldiers to the height of physical perfection via the inventions and discoveries of Professor Abraham Erskine. Rogers eagerly accepted and became the first test subject. After injections and ingestion of the "Super Soldier Serum," Rogers was exposed to a controlled burst of "Vita-Rays" that activated and stabilized the chemicals in his system. The process successfully altered his physiology from its frail state to the maximum of human efficiency, including greatly enhanced musculature and reflexes. Soon after, Professor Erskine was assassinated by a Nazi operative, leaving Steve the sole beneficiary of Erskine’s genius. Renamed “Project: Rebirth,” variations of the Super-Soldier serum were subsequently tested, under inhuman conditions, on African-American soldiers. The most successful of these was Isaiah Bradley, and Project: Rebirth’s resources were eventually absorbed into a multinational superhuman research project dubbed Weapon Plus.

Rogers was assigned to serve as an who served both as a counter-intelligence agent and a symbolic US hero to counter Nazi Germany's propaganda successes head by the Red Skull (Johann Shmidt). Wearing a costume based on his own design modeled after the American flag, Steve was given a triangular bulletproof shield, a personal sidearm and the codename Captain America, the Sentinel of Liberty. He was also provided a cover identity as a clumsy infantry private at Camp Lehigh in Virginia. His first opponents included the Red Skull himself and Nazi attempts to duplicate Erskine’s serum with their own super soldiers. During a mission to the African nation of Wakanda, “Cap” befriended the nation’s ruler T’Chaka and obtained a sample of the rare metal Vibranium. Subsequent experiments with this metal produced a uniquely indestructible Vibranium-steel alloy disc, which proved impossible to duplicate. The disc was given to Cap as his new shield.(2)

Captain America has a number of enhanced abilities which is a result of the Super-Soldier serum. His abilities include enhanced mental faculties,master martial artist and hand-to-hand combatant, mastery of various weapons, expert marksman, master tactician, strategist and field commander. He is also armed with an indestructable disc-shaped shield made of Vibranium which he uses as a projectile attack enemies from a distance and he also uses it to protect himself. The shape of the shield has changed throughout the years, the most common being disc-shaped.

Captain America has numerous allies, the first one being his best friend Bucky Barnes. He also occasionally is helped by Sam Wilson/Falcon. Since he is one of the founding members of the Avengers, they help him when he is in need. Captain America has made numerous enemies over the years, his archenemy being Red Skull. Some of his other enemies include Cross Bones, Baron Zemo and Doctor Faustus. You can check out our Captain America products here.