Bane is a fictional character appearing in comic books published by DC Comics. The character was created by Chuck Dixon, Graham Nolan and Doug Moench and first appeared in Batman: Vengeance of Bane #1 (January 1993).

Bane is one of Batman's most powerful enemies. He gets most of his power when he is injected with the super-steroid Venom. Bane is one of the few enemies who actually broke Batman. In Knightfall, he broke Batman's back crippling for a long time. Chuck Dixon, Graham Nolan, and Doug Moench created the character for the Knightfall storyline, although it is unsure what elements were introduced by each of the two writers (Dixon and Moench). Dixon wrote the character's first appearance (Vengeance of Bane), with art by Graham Nolan. It is also unclear how much input was provided by Denny O'Neil (veteran writer of the Batman books, then Group Editor for the Batman family of books, and author of the novel adaptation of Knightfall). O'Neil had previously created Bane's hellish birthplace of Santa Prisca in The Question and the drug Venom in the storyline of the same name (published in the pages of Legends of the Dark Knight #16-20, and later reprinted as a trade paperback). In the pages of Azrael, O'Neil introduced Bane's perception of Venom as both an addiction and the weakness responsible for his earlier defeats.(1)

Bane's origin story is established in the story "Knightfall". He was born in Germany. His father, Edmund Dorrance (better known as King Snake), had been a revolutionary who had escaped Santa Prisca's court system. The corrupt government decreed that his young son would serve out the man's life sentence, and thus Bane's childhood and early adult life were spent in the immoral penitentiary environment.

Though he was imprisoned, his natural abilities allowed him to develop extraordinary skills within the prison's walls. He read as many books as he could get his hands on, spent most of his spare time body building in the prison's gym, developed his own form of meditation, and learned to fight through the merciless schooling of prison life. Because of the cultural and supposed geographical location of Santa Prisca, Bane knew how to speak English, Spanish, Portuguese and Latin. Despite his circumstances, he found teachers of various sorts during his incarceration, ranging from hardened convicts to an elderly Jesuit priest, under whose tutelage he apparently received a classical education. Bane murdered this priest upon his return to Santa Prisca years later. He committed his first murder at the age of eight, stabbing a criminal who wanted to use him to gain information about the prison. During his years in prison, Bane carried a teddy bear he called Osito ("Little bear" in Spanish), whom he considered his only friend. It is revealed that Osito has a hole in his back to hold a knife that Bane used to defend himself.

Bane is tortured by a monstrous, terrifying bat creature that appears in his dreams, thus giving him chiroptophobia (fear of bats). He ultimately established himself as the "king" of Peña Duro prison and became known as Bane. The prison's controllers took note and eventually forced him to become a test subject for a mysterious drug known as Venom, which had killed all other subjects; the drug was administered by a doctor who bore a passing resemblance to another Batman foe, Hugo Strange. Later, in Vengeance of Bane II the very same doctor encountered Bane again in Gotham City and it is confirmed that it is not Hugo Strange, who, at that point in Batman continuity, was a crazed psychologist and not a surgeon. The Peña Duro prison Venom experiment nearly killed Bane at first, but he survived and found that the drug vastly increases his physical strength, although he needs to take it every 12 hours (via a system of tubes pumped directly into his brain) or he will suffer debilitating side-effects.(2)

Bane is a brilliant military strategist and a trained mercenary. He is in peak human physical condition, he has an accelerated healing factor. Apart from these abilities he gets a number of abilities when he is injected with Venom, including super-strength.

Ra's al Ghul says that Bane "has a mind equal to the greatest he has known" (although he dismisses Bane's intellect as the cunning of an animal rather than the cultured, trained intellect of Batman). His strength gives him more ways to go against Batman. Bane has shown to be capable of lifting 15 tons. In prison, he taught himself various scientific disciplines equal to the level of understanding of leading experts in those fields. He knows six active languages and at least two additional arcane and dead ones. Among these are Spanish, English, Persian, and Latin. The Bane of the Demon storyline reveals that he has an eidetic memory. Within one year, he is able to deduce Batman's secret identity.

He is also highly devious and a superb strategist and tactician. In prison, Bane also invented his own form of calisthenics, meditation, and a fighting style that he uses against other well-known martial arts fighters within the DC Universe. Bane creator Chuck Dixon's early tales portray Bane as a very calm, centered warrior akin to Bruce Lee; in as much that he draws strength through calm meditation, and the spiritual energy of the "very rock of Peña Duro". Dixon imbued Bane with an almost supernatural quality when he explained that Bane triumphed in all of his prison fights by employing these abilities, while his opponents had only rage and greed to propel them. Multiple scenes in "Vengeance of Bane" explore this aspect when it explains that Bane's mastery of meditation techniques "made time and space playthings to him." A subsequent scene that reinforces this ability comes when Bird first comes to Bane for help, because he heard from other inmates that Bane has "magic... the kind that allows him to travel beyond the prison walls." Usage of Venom enhances his physical abilities, including his strength and healing process, to superhuman levels.

Although Bane had sworn off using Venom in Vengeance of Bane II in 1995, and his character is actually written as having kept that promise to himself, it is still not uncommon for artists to draw Bane as still wearing the tube leading from his old wrist device to the back of his head, as well as almost all media adaptations of the character show him actively using the Venom compound. Writer Gail Simone explained these lapses in the continuity of Bane's appearance in an issue of Secret Six, in which Deadshot remarked that Bane merely kept his old Venom equipment with him out of habit, even though Bane states that he would sooner die than use it again.(3) 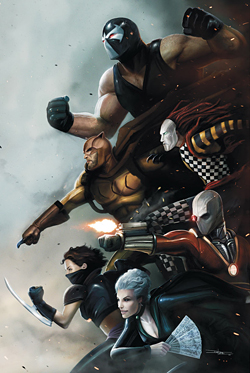 Bane usually works alone, but occasionally has teamed up with Rag Doll, Catman, Deadshot, Scandal Savage and Jeannette. They call themselves the Secret Six. Since Bane is a supervillain his enemies are superheroes including Batman, Nightwing, Batgirl and most of the heroes who reside in Gotham. After the release of Batman Forever, Warner Bros. started development on Batman & Robin, commissioning it on fast track for an adamant June 1997 release Val Kilmer did not return, because of scheduling conflicts with The Saint, and was replaced by George Clooney. Arnold Schwarzenegger starred as Mr. Freeze, while Uma Thurman starred as Poison Ivy and Alicia Silverstone starred as Batgirland Robert Swenson starred as Bane.. Chris O'Donnell reprised his role as Robin. Principal photography began in September 1996 and finished in January 1997, two weeks ahead of the shooting schedule. Batman & Robin was released on June 20, 1997, and received primarily negative reviews. Observers criticized the film for its toyetic and campy approach, and for homosexual innuendos added by Schumacher.Still, the film was a financial success,but remains to be the least commercially successful live-action Batman film ever. Batman & Robin received numerous nominations at the Razzie Awards and ranks among the worst rated superhero films of all time. The Dark Knight Rises was the third and final movie of The Dark Knight trilogy. Christopher Nolan was the director again as the movie featured Christian bale reprising his role as Batman,Tom Hardy as Bane and Anne Hathaway as Catwoman. The movie had positive reviews and performed well at the box office but was not as much enjoyed as The Dark Knight. Tom Hardy's portrayal of Bane was widely appreciated and praised.

You can check out our Bane products here